Markets across the world have borne the burdens of the Covid-19 pandemic, and where that is especially apparent is in the European market.

Europe’s retail industry has struggled significantly during 2020. However, the pandemic has also been a catalyst for online sales, pushing European shoppers in more mature markets to buy online more than ever and shoppers in less mature markets to buy online for the first time. Brands that don’t already have eyes on Europe should pay attention—its online shopping audience competes only with China in size.

Across the board, European shoppers are spending more time shopping online. In Western and Northern Europe, e-shopping penetration rates are the highest, while in Eastern and Southern Europe, particularly Spain and Italy, more shoppers are trying online shopping for the first time in a trend we anticipate will stick.

While we don’t yet have a complete view of the year, the following snapshot of data hints at the level of penetration across markets in 2020: in the UK, the percentage of grocery shopping bought online rose from 7% of the total in February 2020 to 13.5% of the total in July 2020.

Brands within and outside of Europe are taking notice of D2C trends. According to Lego Director for Ecommerce Strategy & Growth Kasper Thams, “Europe has a much more fragmented offline retail landscape, and many of the strong offline players are moving online.”

A trend we’re seeing this year is that brands are placing more focus on their direct-to-consumer websites rather than third-party online or omnichannel retailers. These sites are being used to complement existing channels rather than compete with them.

The rise of marketplaces in Europe

One of the most noteworthy trends we’re seeing in 2020 is the rise in popularity of online marketplaces. Compared to the US or China, Europe has been slower to take to marketplaces, but they’re becoming an increasingly important online route of entry for brands across the globe attempting to get a slice of the European market.

In the past few years, and especially in 2020, online marketplaces in Europe have attracted significant traffic and seen high visitor engagement that has translated into sales. They accounted for 59% of the 143 billion euros spent on cross-border ecommerce by Europeans in 2019, according to Cross-Border Commerce Europe.

While Thams doesn’t believe marketplaces will become as dominant in Europe as they’ve become in the US and China, he does believe brands need to get the formula right for their other channels or they’ll miss out on the coming ecommerce growth. The marketplace brands should be looking at especially close is Amazon.

During lockdown, European consumers turned to Amazon en masse for their shopping due to its convenience, delivery, and prices. There are nearly 300 million unique visitors on Amazon’s six main European sites each month, and the platform’s traffic has risen in every European market during 2020, with visits up by 17% in the UK and 9% in Germany between March and August 2020. Amazon is estimated to have a circa 30% share of the UK and Germany ecommerce markets.

Amazon’s fulfillment capabilities—particularly its next-day delivery—and its ability to offer in-demand goods at consistently lower prices than competitor retailers has been central to its success in the region. During lockdown, top selling categories on the platform ranged from Consumer Electronics, Toys & Games, Health & Beauty, and Home & Kitchen, all reflecting the “stay-at-home” shift.

At Pattern, we’ve seen similarly high numbers with our own Amazon brands in the region. There is significant interest in Amazon as a sales channel from brands in less digitally mature markets. With the imminent launch of the marketplace in Poland and Sweden, we anticipate Amazon’s market share within Europe will continue to grow.

Snapshots of the top three European markets in 2020

The UK has a population of 68 million, and 87% of the population bought online in October. Online sales in August were up 43.5% year over year in the country. Since lockdown measures began in March in the UK, there’s been a huge shift toward online channels and sales have been sustained in the country.

Amazon.uk, eBay, and Argos are the top three shopping sites by traffic. Omnichannel retailers also saw online sales rise 70.5% year over year in the UK, partly because many retailers launched Covid-secure click-and-collect services to get around slow delivery times. 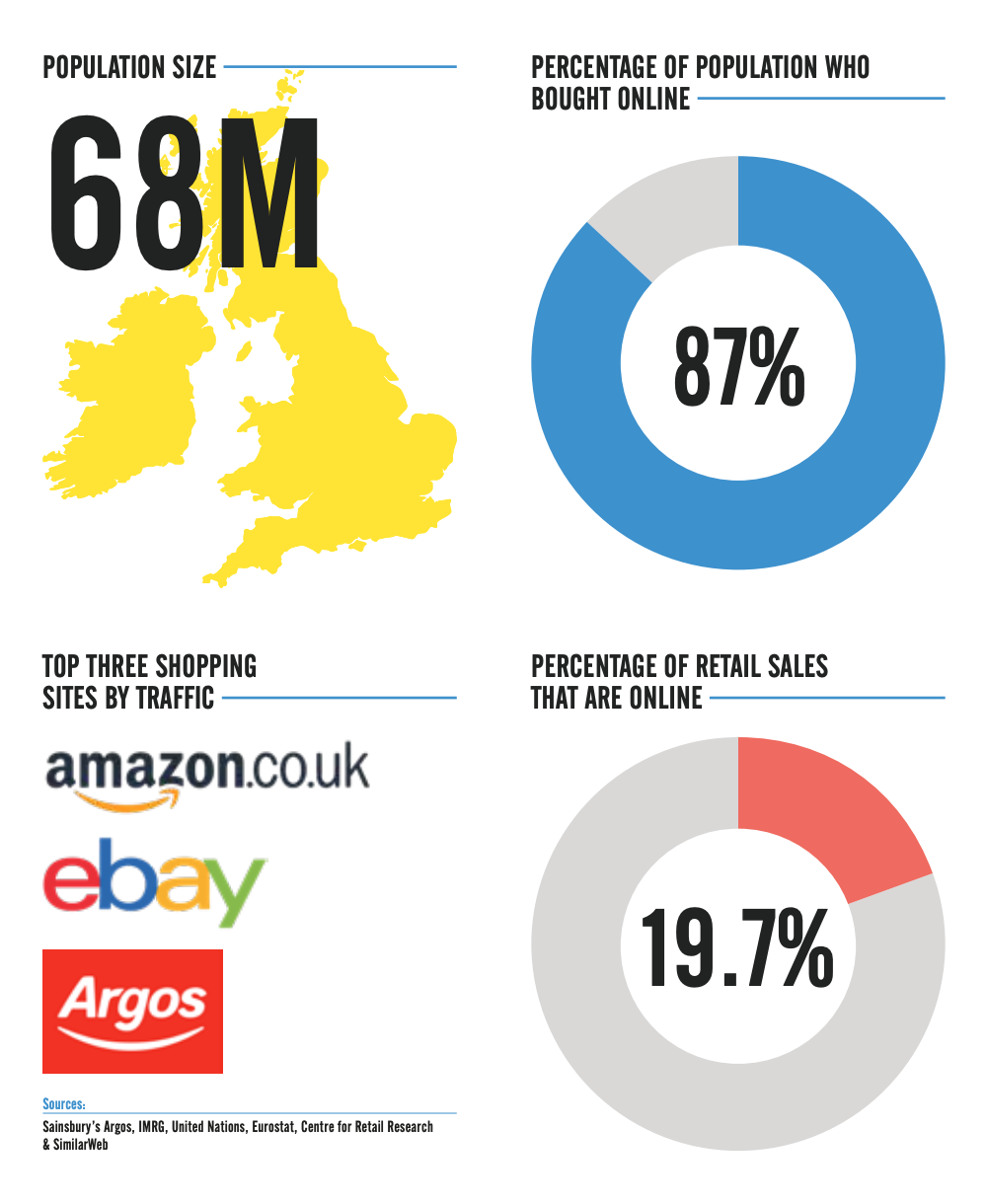 Germany has Europe’s largest online shopping audience and presents a significant sales opportunity for brands, especially as the German economy has suffered less than others in 2020.

The pandemic has accelerated the digitalization of retail in Germany at every level. All of the top three shopping sites in Germany are marketplaces, with Amazon once again retaining the number one spot, and marketplaces accounted for at least 40% of German online sales even before the pandemic.

France is another mature marketplace in Europe that’s seen heightened competition on sites like Amazon and eBay due to retail closures. It’s estimated that retail ecommerce sales in France will rise by 17.1% by the end of the year, with the increase driven by the nation’s strict lockdown restrictions in comparison to other European markets. 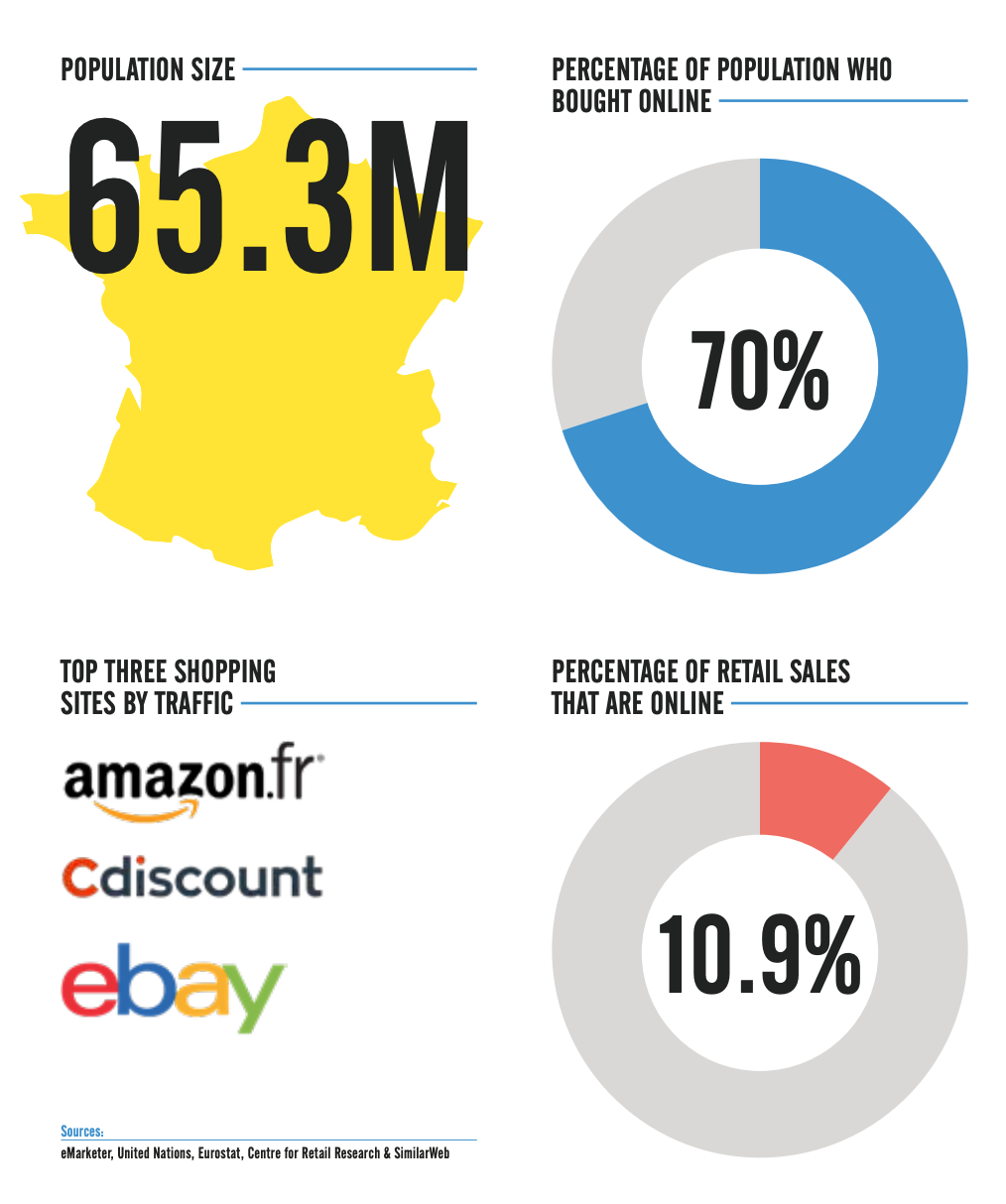 How Pattern can get you into Europe

Higher ecommerce penetration rates are here to stay in the European market, but with the rise of online marketplaces in Europe, and particularly Amazon, retailers and brands must differentiate through the customer experience they provide on the websites if they want these channels to deliver incremental sales.

Success in the region requires a balancing act of multiple online channels to service customers. That’s where Pattern comes in.

Pattern operates from ten locations globally in the ecommerce space. We connect you with teams on the ground who have the resources and technology to get you into the market and help you provide a stellar ecommerce customer service experience.

To learn more about international ecommerce and how your brand can flourish in the ecommerce space, contact us using the form below.

Marketplaces are becoming an increasingly important online route of entry for brands across the globe attempting to get a slice of the European market.