What a month it's been for ecommerce. In the ever-changing landscape of the "new normal" since COVID-19, our monthly blog is designed to help ecommerce decision makers stay in the know of the most important and impactful ecommerce trends.

In our last post, we made it clear that, “in a matter of months, COVID-19 has leapt ecommerce forward by a couple of years.” Though everyone knew the market had moved forward by about 3-5 years, the actual numbers have come out and are remarkable. According to McKinsey, ecommerce market penetration jumped forward 10 years in Q1 alone! 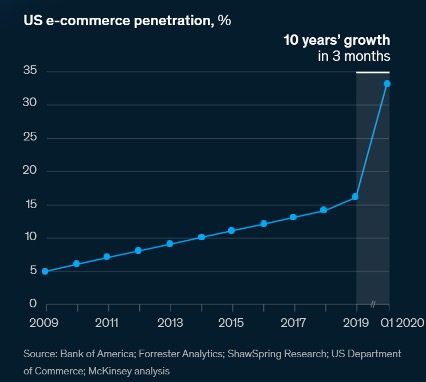 CNN put it best when they said, “Our pandemic shopping habits are here to stay.” For years, many companies have lacked the necessary focus on ecommerce because of its P&L share. That will change. The companies that invest in ecommerce will likely gain the greatest market growth.

More people are shopping online, and how they shop is evolving

As more people shop online, the old playbooks are changing. More and more customers are looking for consumables (products you buy more than once like hand sanitizer) over durables (one-time purchases like Apple Airpods). Below you can see how these search trends have changed on Amazon by rank over the course of a year. 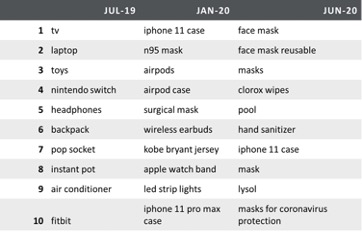 Image and data by Pattern

Amazon is not the only place where shopping habits are evolving. Though Amazon is growing in sales, they are losing search traffic market share to other ecommerce platforms. Amazon share is down from 52% in January to 47% in June. 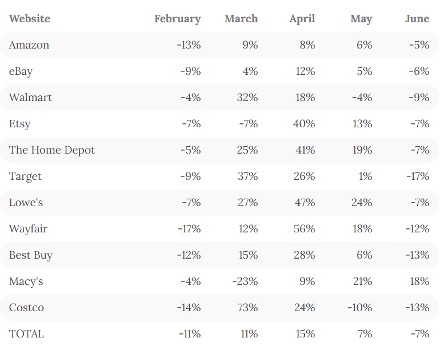 We are seeing dotcom traffic share spikes for sites like Home Depot, Lowe’s, Macy’s, and others. This does not mean you need to hit the brakes on your Amazon account. It is common for industry leaders to lose market share as the market grows. We suggest you simply hit the gas on every other market by diversifying across ecommerce. More people are shopping online, and how they shop is evolving.

Habit changes are not only changing how we shop or where we shop, but also what we shop for. Some of these increases can be expected, like cleaning tools or masks, but others are a little less intuitive. For example, Kellogg raised its annual sales and profit forecast Thursday, anticipating higher profits from people eating more cereal at home during the pandemic and related shutdowns.

Ask yourself, “How has my shopping habits changed during the pandemic?” Look through your assortment; if you see any positive changes, lean into them.

Brick and mortar is getting hit hard, including Amazon, but many are adapting

Brick and mortar locations may forever be changed. Mall owners across the country are filing for bankruptcy, rent costs are free falling in some of America’s glitziest shopping districts, and over 6,000 brick and mortar stores will be closing/closed in 2020. The list of casualties include the following:

Brick and mortar is getting hit hard, but many, including Amazon, are adapting. There has been a major omni-channel play by Amazon. Amazon recently announced that they would be commercializing their “just walk out” Amazon Go technology. This technology uses phone-location, cameras, and RFID technology to allow a customer to simply walk in, put an item in their cart, and walk out without checking out physically. Amazon has also developed similar shopping cart-based technology that is able to be used in existing stores without the camera installations necessary for Amazon Go.

Amazon is not the only retailer looking at expanding their omnichannel. Kroger is building a DC Metro distribution center despite not having any nearby physical stores. Bill Bennet, the head of ecommerce at Kroger, recently stated that “Kroger is building some amazing, industry-leading stuff, including our Ocado sheds opening soon, Nuro delivery tests in flight, and our incredible grocery pickup/delivery capabilities bringing Fresh for Everyone.”

Look at your ecommerce sales through the lens of the total market. As your brick and mortar partners close their doors, those customers do not disappear. Ecommerce is the likeliest place for you to make up in terms of growth.

Walmart is changing their game for the omnichannel experience.

Walmart is also optimizing their omnichannel play. After a move early this year to have ecommerce buyers report through the store organization, Walmart brought hundreds of ecommerce jobs back to their corporate HQ in Bentonville, Arkansas. Many of these associates were dotcom buyers who will now be managing as omnichannel associate buyers.

In addition to these omnichannel changes, Walmart seemed to officially launched Walmart+. For under a hundred dollars a year, Walmart will offer same day delivery on a wide assortment, including grocery. Walmart has delayed the launch more than once, and further tested the program across a number of specific regions. Some report that the actual implementation may still be delayed.

To further improve their omnichannel coordination with vendors, Walmart has created a one stop advertising dashboard said to rival Amazon. The tool should allow vendors to see if their online advertising leads to instore purchases. Walmart is changing their game for the omnichannel experience.

Walmart dotcom has largely been ignored because of its size compared to Amazon and Walmart stores. By viewing Walmart as an omnichannel, you will be able to experience the most YoY growth.

Amazon is making changes in prep for holiday 2020, some good, and some hard to work with

Like Walmart, Amazon has also improved their advertising dashboard, adding ROAS to its metrics. This will allow advertisers to move away from the Amazon favored ACoS to better measure return on ad spend. 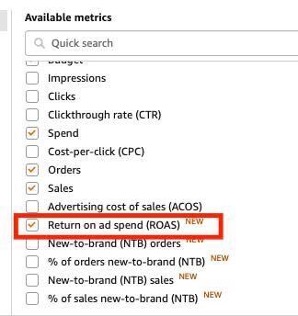 This may be some of the only good news coming out of Amazon. To prevent a second wave of shipping restrictions, Amazon has created SKU level shipping restrictions across several categories. Starting at 200 per seller per unit, Amazon is limiting assortment in prep for holiday. Limitations are based on forecasted demand. Amazon says they will open up the restrictions come holiday. We recommend being ready to send in most of your inventory once the doors open. These will not be the last inventory restrictions we see this year.

Much can be said about Bezos’ testimony to congress. Jeff Bezos put out an 8 page written statement where he shared some of the following insights.

“Who do Americans trust more than Amazon ‘to do the right thing?’ Only their primary physicians and the military, according to a January 2020 Morning Consult survey,” he said.

“Amazon accounts for less than 1% of the $25 trillion global retail market and less than 4% of retail in the U.S. Unlike industries that are winner-take-all, there’s room in retail for many winners. For example, more than 80 retailers in the U.S. alone earn over $1 billion in sales.”

Despite the statement, Bezos was grilled on how they use their sellers’ data. Days later, states like New York announce they are looking at investigating Amazon.

This will likely not be the last time we hear about Amazon being questioned by law makers. We will keep an ear to the ground if there are changes that could affect selling on Amazon.

All in all, retail is changing daily, especially in the new climate since a global pandemic. Come here the first Wednesday of each month to keep up with our Pattern Forecast and stay in the loop. To learn more about what Pattern does, contact us below or subscribe to our biweekly Insights newsletter.

"For years, many companies have lacked the necessary focus on ecommerce because of its P&L share. That will change. The companies that invest in ecommerce will likely gain the greatest market growth."

The Most Popular MLB Teams on Opening Day 2021, According to Consumer Behavior

The Best Easter Candy, According to Amazon Demand