2020 had plenty of downsides, but it was an incredible year for ecommerce. According to Digital Commerce 360, consumers spent a massive $861.12 billion online with U.S. merchants—that’s a 44% growth year-over-year! It’s the highest annual U.S. ecommerce growth in at least two decades, Digital Commerce reports.

Ecommerce growth was unsurprisingly dominated by Amazon and Walmart (the latter overtook eBay to snag the number two marketplace spot last year), but one marketplace that got noticeably ahead in the pack is newcomer Target.

Though it’s been slower to unroll it’s marketplace offerings, Target is making waves in the omnichannel sphere, and brands and retail competitors may want to take note, because the implications for its Target Plus platform are exciting.

Target’s digital sales numbers for 2020 aren’t just good—they’re historic. The evidence is in the stats.

“It appears they are much more engaged with us,” he said.

Target announced in August that their Q2 comparable-store revenue, including online, grew 24.3%—the highest amount the company has ever reported—with digital sales accounting for 13.4% of Target’s comparable sales growth and physical store comp sales increasing 10.9 percentage points. Those numbers have outpaced Walmart’s, as Target is starting from a much smaller base. 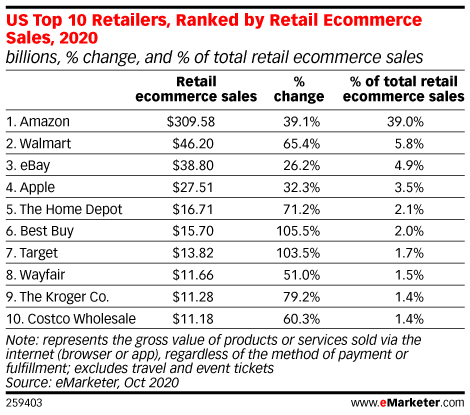 An October report from eMarketer shows that Target made $13.82 billion in sales in 2020, a 104% year-over-year change from 2019, and 1.7% of those total sales came through ecommerce. That was before the holiday season even got started.

Cyber Week 2020 was Target’s biggest ever, the company reports, with record-high digital orders, site traffic, and orders fulfilled via their curbside pickup service, Drive Up. In December alone, Target reports that guests purchased 150 million items using Drive Up and their Order Pickup services. While the global pandemic may have boosted demand for the Drive Up program, only time will tell if the convenience affects consumer behavior going forward.

Target’s sales were enough to push it to seventh place on the list of Top Marketplaces in the United States, ranking it above Costco, Wayfair, and Macey’s and just behind Home Depot. Target didn’t rank within the top ten in 2019, showing just how impressive their 2020 growth has been. 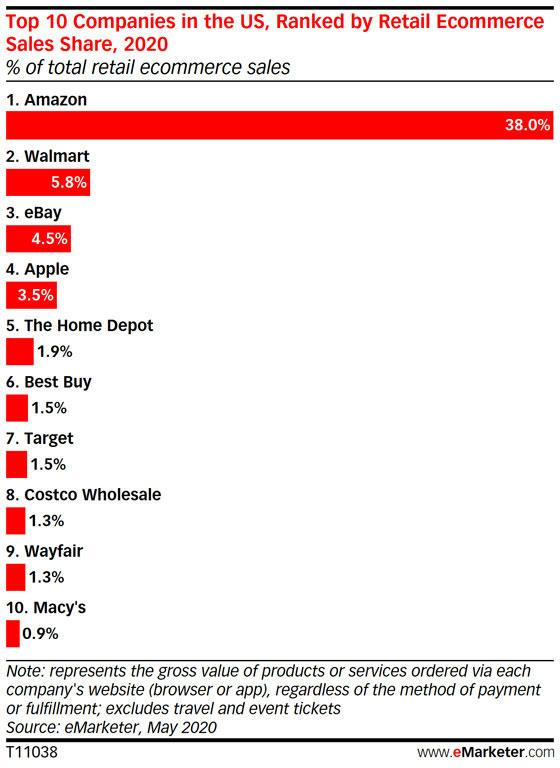 Target has been investing heavily in their omnichannel since launching Target Plus. They implemented same-day shipping and curbside options—their Drive Up, Order Pickup, and Shipt services—before the Covid-19 pandemic began, and those same-day services are driving much of their digital growth.

Similar to Walmart Marketplace’s returns system, Target customers can purchase goods online and have them delivered quickly via Target’s network of stores, which act like mini distribution centers. If customers decide to place a return, they can also return the product to a Target location sans the boxing and shipping. These services have made the shopping experience easy for customers, and they’ve paid Target back in full.

Target reported in January 2021 that their same-day services grew a combined 193% during the holiday season, with millions of guests trying these services for the first time. The value of web orders fulfilled through Target same-day shipping services also grew 273% during its second quarter, accounting for approximately 6 percentage points of its total comparable sales growth. Mulligan said the value of the orders shipped from stores has grown more than $1.6 billion

Another thing we mentioned previously that’s driving a surprising amount of growth for Target is Drive Up. According to the transcript of a Target investor call held in November, nearly $700 million of Target’s growth came from their Drive Up service alone, which increased 500% year-over-year from 2019. That’s faster than any of their other same-day services (sales fulfilled through Target’s delivery service Shipt grew 300%). That growth, wildly, didn’t slow down in-store pick up—in-store pickup also increased more than 50%.

“We’ve seen continued strong sales trends in the new year, and as we turn to our 2021 plans, our team is focused on continuing to build on the guest engagement and significant market share we gained throughout 2020,” Brian Cornell, Target CEO, said.

Long story short, Target’s omnichannel strategy has played a critical role in boosting the brand’s growth by meeting consumers where they are and providing continued convenience.

What’s new with Target Plus?

Target is a massive 2020 success story, but updates have been fairly quiet on the Target Plus front.

Last April, we reported that Target planned on testing curated shipments of fresh food and adult beverages through their pickup and drive up services, similar to what Walmart and Amazon are already doing. In February 2021, Shipt announced a partnership with GNC to offer same-day delivery service for GNC health and wellness products, expanding the company’s grocery delivery options further.

"We're in the midst of an exciting evolution to a multi-vertical, multi-retailer delivery service and are thrilled to have GNC as part of the Shipt family," said Rina Hurst, Chief Business Officer at Shipt, in a February press release.

Much of Target’s focus has been on their same-day shipping services.

Target’s invite-only marketplace was launched back in February of 2019, and the platform has been slowly growing its number of third-party merchants and products. Starting with 30 sellers in February 2019, Target+ has grown to 272 sellers, according to Marketplace Pulse.

Target is differentiating itself from Amazon and Walmart with a more exclusive selling model on Target Plus. Unlike Amazon, not just anybody can sell on Target Plus, and not every product can be sold there, either—quality goods and vendors are hand-curated by the brand to ensure an excellent customer experience.

Target has been onboarding a limited number of strategic partners per category, according to Feedonomics, and their requirements are pretty stringent: sellers must have a business and bank presence in the U.S., they have to price their products on Target Plus at parity with their other sales channels, and orders must be shipped out within 24 hours.

One interesting feature of Target Plus is that it does not allow multiple merchants to list the same UPC. While that cuts down multiple distributors on a product, it also means that brands that are on the site early can secure market share.

Kevin Lamb, Marketplace Manager at Pattern, said he expects Target’s 1P growth will “vastly outpace” the growth of 3P offerings on their site.

“This is partly because their 1P offering is such a good customer experience, with curbside pickup, same day delivery and BOPUS (buy online pick up in store). It's also partly due to their current strategy with 3P sellers,” Lamb said. “They want fewer sellers and fewer brands, focusing on quality over quantity, so that their marketplace doesn't become cluttered like Amazon, eBay, or to a lesser extent, Walmart.com.”

Pattern is about to launch our first few brands on Target Plus, and we can’t wait to share our findings. It’s an exciting next step for our brand partners, and with Target expanding its digital services and presence, who knows what the future of the platform may hold?

To learn more about Target Plus and how Pattern can help you with your omnichannel ecommerce strategy, contact our experts today.

Transitioning from a 1P to a 3P Seller

Target's Ecommerce Offering Is Expanding. Here's What You Need to Know

How to Respond to Negative Reviews on Amazon